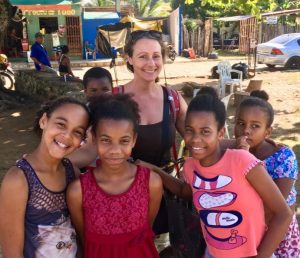 Jaci was born and raised in upstate New York to an American mother and a Brazilian father. When Jaci was eleven years old she travelled to Brazil for the first time to visit her large, extended family. While stuck in traffic in downtown Sao Paulo, a small group of children in torn up clothes ran up to the car, tapping their hands against the windows and pleading for change. Immediately, Jaci’s uncle said “NO” in a harsh voice and everyone proceeded to roll up their windows.

This was Jaci’s first experience with poverty, and she was shocked that her own family could deny a few poor children some pocket change. When she asked her father how this could be, he simply stated: “The world is an unfair place for most people” and then proceeded to point out the million dollar hotels and beachfront properties in comparison to the vast stretches of shantytowns or “favelas” on the hillsides. This was indeed a defining moment; a moment when Jaci first began to realize her calling: to work towards a world that is more fair and just for more people.

Jaci earned a Bachelors degree (BA) in Psychology and worked in therapeutic foster care for a few years. She later moved to Colorado to earn a dual Masters in Social Work (MSW) and International Studies (MA). Jaci worked as a community organizer in Denver for several years, mainly focusing on social justice and human rights issues with a deep emphasis on immigrant rights.

In 2010 Jaci was brought to Washington D.C. to lead the grassroots immigration campaign for two national federations. After a year and half of politics in D.C., Jaci decided that it was time to move abroad to live a simpler life. She sold her car and let go of most of her material belongings to improve her Spanish and pursue a career in International Development. Jaci first went to Nicaragua to travel, volunteer and complete her yoga teacher training certification.

She later moved to Peru to accept a position managing a volunteer lead Non Governmental Organization (NGO). In February of 2015, Jaci decided to pursue her lifelong dream of moving to Brazil to finally learn Portuguese, connect with her Brazilian roots and start a new NGO someplace where the disparity and the need is quite profound.

Exactly 30 years after her first trip to Brazil, Jaci founded ETIV do Brazil; which envisions a world where more people care for each other and the environment, actively creating greater equality and opportunities for all.