The Humpback Whale Makes its Way to the Coast of Bahia 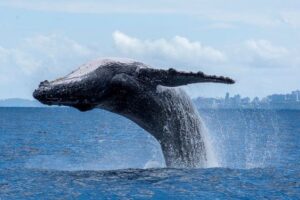 Every year, the humpback whale returns to the coast of the Brazil around the wintertime, stopping to enjoy the warm waters and mate. They are generally seen along the coast of the Brazilian state of Bahia anytime from July to September. In honor of their yearly appearance in cities like Salvador and Itacaré around this time of year, keep reading to learn more about these magnificent creatures!

The humpback whale is a baleen species of the genera Megaptera and family Balaenopteridae. Their scientific name, Megaptera novaeangilae, translates to “large wing of New England,” referring to their huge pectoral fins as well as the location of their initial discovery – New England. These whales are characterized by having a small hump on top of their dorsal fin, leading to their common name, the humpback whale (Baleia-jubarte 2021).

This whale species is rather massive, with adults weighing around 35-40 tons and measuring around 12-16 meters in length (Baleia-jubarte 2021). Interestingly, their tales, which can measure up to 1.5 meters in length, have unique markings on the underside that can be used to identify individuals, similar to a human fingerprint. Additionally, variation in size and coloration can be used to distinguish amongst different individuals. The majority of the body of the whale is a dark black color; however, the ventral side often contains splotches of white, the amount of white varying depending on the individual and population (Fisheries, Humpback Whale).

Humpback whales can be found in every ocean in the world and have one of the longest migrations of any mammal, traveling up to 8,046 km each year (Fisheries, Humpback Whale).

They generally spend the summer season in polar regions while feeding and then migrate to the tropics during the winter to reproduce. The distance in which they migrate varies depending on the population: It is believed that there are at least four different populations of humpback whales in the North Pacific, two in the North Atlantic, and seven in the Southern Hemisphere (Fisheries, Humpback Whale). The population that is seen along the coast of Brazil has a pattern of feeding in Antarctic waters and then returning to Brazil in the winter to mate and reproduce (A baleia – Jubarte: Projeto Baleia Jubarte). 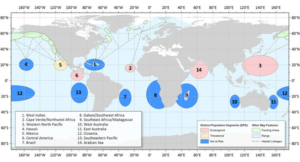 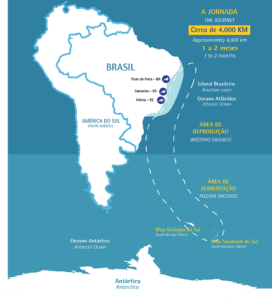 This figure shows the annual migration pattern of the humpback whale population that frequents the Bahian coast in the winter. (https://www.baleiajubarte.org.br/a-baleia-jubarte)

The humpback whale is a favorite of observers around the world, well-known for visiting areas close to the shoreline and exhibiting eye-catching behaviors, such as jumping out of the water and slapping the water with their tails. Whale-watching tourism in cities like Salvador, Bahia has gained a lot of popularity in recent years, especially now that the species has recovered back to abundant population levels.

Despite and importance of these magnificent animals to marine ecosystems, humpback whales were known to be more valuable dead than alive for many years. In the beginning of the 18th century, humpback whales became threatened by industrial and commercial whaling and were captured and killed for many years to be used for things like oil and building materials. After years of being hunted, humpback whales were at serious risk of extinction, with only 10% of the original population remaining. Fortunately, when numbers continued to fall, certain countries began to realize the severity of the situation and implemented bans on industrial whaling. Finally, in 1986 an international ban on industrial whaling was put into place and organizations around the world worked hard to recover the species to normal population numbers. As a result, humpback whales were able to make a recovery (Baleia-jubarte 2021) and have been returning in large numbers every year along the coast of Bahia as well as other Brazilian states and other oceans around the world. Today, the humpback whale is considered to be of “least concern” by the IUCIN red list (Humpback Whale 2020).

“This is very symbolic: a completely savage animal occurring in an urban region like Salvador.”

Although the recovery of the humpback whale has been a huge success story, these whales unfortunately still face a number of other threats, the biggest ones being collision with vessels and entanglement in fishing lines (Humpback Whale 2020). Both frequently result in the death or serious injury of the whale. Additionally, in certain countries such as Greenland, industrial whaling is still permitted and has become a huge problem facing the livelihood of the species (Humpback Whale 2020).